To Paddle or not to Paddle?

(This article was originally published in http://www.yourswimlog.com/ultimate-guide-swim-paddles/ and is published with the kind permission of Olivier, olivier@yourswimbook.com)

Swim paddles are a staple in just about every swimmer’s training. Here is everything you need to know about making the most of this piece of equipment.

“Fins and paddles!” coach called out.

A chorus of smiles and cheers swiftly followed. Some things are totally universal in our sport, and one of them is the pleasure in getting to Mach-1 while wearing equipment that throws our swimming into hyper-drive.

Paddles are one of those pieces of equipment that are found in just about every swim bag across the world, but have you ever really stopped to think about why we use them?

From how you should use them, the research behind their effectiveness, the shortcomings of their use, and even some links to some of the best rated paddles on the market, we are going to cover everything paddle related.

Here is just about everything you ever wanted to know about swim paddles.

As an experienced swimmer you have used them so many times that you have never really paused to consider the point of them. But you do know what happens when you strap them on: you swim longer (in terms of distance per stroke) and you swim faster.

The research backs this up:

The Benefits of Swim Paddles

There are generally two main benefits to incorporating paddles into your training: building power and strength in the water, and also to help solidify good technique habits.

Here’s why you should use paddles during swim training:

In terms of building strength and power this is about as specific as it gets. As long as you are performing the stroke precisely as you normally would (which can be hard with a slower catch and pull as shown in the research above), you are adding resistance to your stroke.

2. Teach you speed and efficiency.

You don’t need me to tell you that swimming with paddles is awesome because you get to go much faster—probably as fast or faster as race pace when going all-out. When swimming at this kind of speed you can really get a feel for how you are most efficient in the water, from keeping a rigid torso, to having an early catch, and so on.

3. Spices up your workout.

For those long, monotonous repeats of 500s or whatever coach is subjecting to you that day, throwing in some paddles is a an easy way to mix things up and keep you fresh mentally.

When you are feeling particularly hardcore use only the middle finger strap. When you don’t engage the early catch the paddle will slip off and you will be feeling like a rank amateur having to put your paddle back on mid-length. (On the bright side it will teach you what not to do.)

Everything is not all golden when it comes to your hand paddles, though. If you’ve ever had pain in your shoudlers you know that they tend to exacerbate the tenderness, and while they can encourage some good training habits in some instances they can also open the door to bad ones:

Start with paddles just larger than your hands.

We all vary in terms of natural hand size and shoulder strength. You might have small hands but boulder-shoulders, and vice versa—so start with paddles that are just a little bit larger than your hands and progress from there.

The tendency is to start with dinner plates right off the bat (guilty!), but if it means that your stroke is unbearably slow or that its straining the tendons in your elbow than the paddles become a moot training tool.

The last thing you want to do is throw on some paddles and start ingraining some less-than-rad training habits. By removing the wrist straps you will find out very quickly whether or not you are swimming with good technique, particularly in freestyle.

If you aren’t swimming with your “natural paddle”—the hand to elbow, and going for early vertical forearm at the beginning of the pulling motion, the paddle will slip right off. To be sure it is annoying when it happens, but it will keep you on your game technically.

A common occurrence with really big paddles is for swimmers to spread their finger sin order to more evenly apply pressure across the paddle. If you need to do this the paddles are too large.

The Best Swim Paddles on the Market

Alrighty, so now that we have covered the ups, the downs, the benefits and downsides of using the bad boys, here are my choices for the top three paddles on the market. 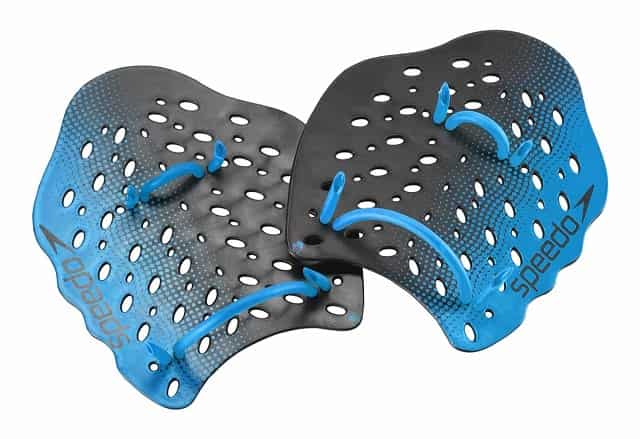 I put these bad boys at number one because, well, they are in my swimming bag. The current set I have (the XL) are going on year three of working rather wonderfully.

I have taken the wrist straps in and out a few times with no visible wear or worrying that they would snap.

They would be in better shape if I took them out of my mesh bag once in a while and gave them a rinse, but hey, I’m kinda lazy when I get home after swimming for two hours.

They are available in small to extra large. 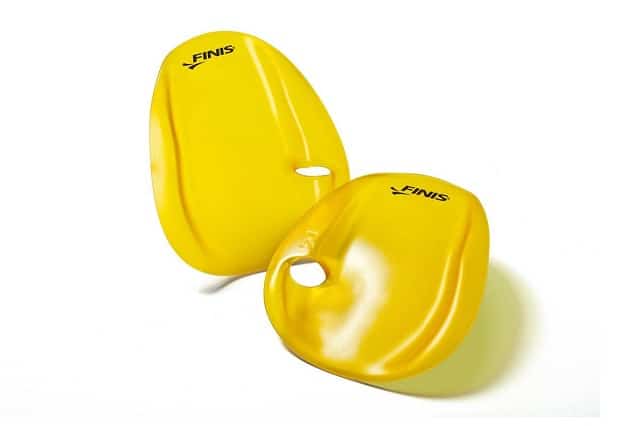 When it comes to freestyle, crushing the catch and having a strong early vertical forearm separates the top of the pile from the rest. These paddles–which have no straps–are built specifically to insure that you are catching teh water early and fast.

(These paddles are also usable in other strokes, but as a freestyler myself this has been my experience using them.)

The premise of the Agility paddles is simple: swim with good technique or you are spending half the workout stopping mid-length to put them back on your hands. 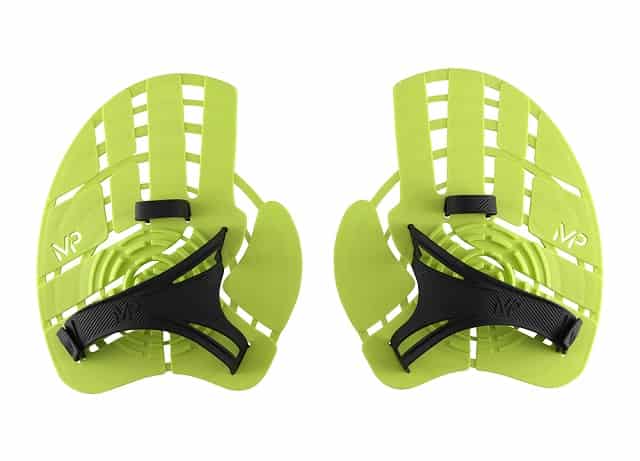 Since the GOAT and Speedo parted ways a few years ago you got the sense that it was only a matter of time before he came out with a full line of swim gear. His entry into the swim paddle market is a strong one, with a raised contour under the palm, and vents/holes in the paddle to maintain a feel for the water.

His coach Bob Bowman helped in the design, and counts them among his favorite so far:

They give you the feel of the hand and the way it is when swimming because of the raised portion under the palm of your hand. It’s not a flat surface. You’re actually in a much more natural position.”