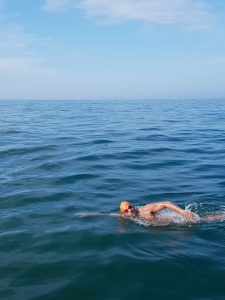 9 July 2017 I swam the English Channel. There was so much support. Its been amazing. Thank you.
I committed fully to attempt the English Channel swim this season only recently, when hanging out with Chloe Harris and Philip Rush in March in Cook Strait . Chloes tenacious Cook swim was inspiring and Philips words ‘ there’ll never be a good time so just get on with it ‘ .
I was booked for an English Channel attempt in August with a possible opporunity late July.
And so it was Fri 7th July after my busiest 7 days of training to date, a chance pm phone call with my future English Channel pilot Stu Gleeson/Sea Leopard and an empty slot the following evening. I have a ring given to me by my long time coach friend and mentor Brett Naylor. It has one inscription ‘Carpe Diem’. Say no more.
Work was cancelled Saturday. Rest and logistics preparation. It was the start of a springtide so pretty big water movement. That was a known. Conditions were pretty good but there were plenty of hours of niggly chop with the nice little waves in the face. I had a couple of night time visits from Jelly Fish. Annoying and disconcerting more than nasty. I looked forward to sunrise as that hour chill before dawn brings the temperature down a notch. Dawn came and a beautiful sunrise I could see while swimming… along with a view of the jelly fish below and occasionally in front .
Through the shipping lanes we went and into the French side. I had no sickness at all from feeding, we had worked hard on developing a feed program and it was effective for me. The team on Sea Leopard Stu/ Andy along with John , Richard and Glynn (All of whom dropped everything at a moment’s notice to support me – thank you ) worked there butts off to ensure I got to France. I could not have done it without them. The last couple of hours and it was touch and go if I would make land or be swept down the coast another couple of hours. All I knew from my support crew was that I had to give my all for an hour. And then another hour. It was fairly brutal but at the same time standing on that rock on the French shore with very wobbly legs was one of my most rewarding achievements ever. 11 hours 15 mins. There has been so much support – thank you. I do want to thank my parents Bruce and June for all their support over the years, no matter how crazy my goals. Also our swim partners #Zoggs #PureSportsnutrition #SwimEars #AloeUp they were all on the water yesterday. And finally I hope my swim inspires other people out there to pick a challenge. Your ‘English Channel’ no matter how big or small. Remember there is no ‘Right Time’ . Carpe Diem . Dan Abel founder of www.fitandabel.com and professional dream chaser. 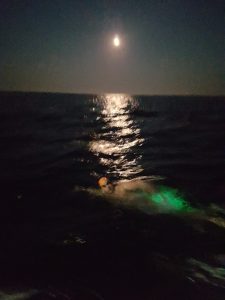